I was invited to participate in the International Art Festival «At The Fringe» in Tranås, Sweden. The festival itself had a program from June 29 to July 6, 2019, where poetic short films were screened, while there was a literary program, as well as creative writing and dance workshops, without neglecting the art exhibition in galleries. The underground scene also made its appearance with some dance performances.

The residency lasted three weeks in which artists from various disciplines lived and participated cooking, talking, doing collaborative work and having some social life. During this period, of which I was little less than half the time, you could see people walking around the house at any time, discussing and working on the products that they would exhibit at the Festival.

I believe that this type of format is an amazing way to increase the creativity of a collective mind, then printing the particularities of each person in the mood of the activities displayed before the general public. 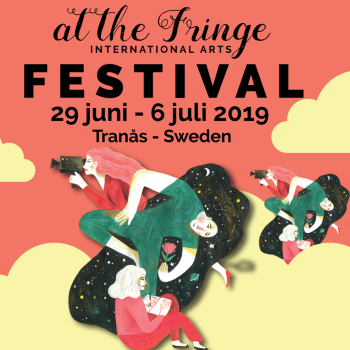 With the director of Kultivera Colm Ó Ciarnáin and our facilitator / moderator Dominic Williams, in addition to the Kultivera staff, we were able to experience some of the most interesting discussions and environments in the small town of Tranås in the commune of Jönköpings, Sweden.

I presented part of my trip to and around the «Popol Vuh», that magnificent Mayan Book, which today is considered the «National Book» of Guatemala, although it is a work of the Quiché people of the pre-Hispanic world. I included some of the current works in different areas of arts and literature, where the Popol Vuh has a certain presence, and I also commented how this knowledge has been transforming my own vision, not only of myself, but of the region from which I come from, which includes a wealth of cultural practices and ideas that touch upon Mexico and Central America. In short, a review of the time and ideas of men and the women of corn.

The people welcomed the talk. This was launched as part of the literary program in a set of activities called «Passion for words», where the authors did a great job in expressing their interests and concerns about literature that touches various aspects of the human life experience.

In the reading section we visited different places, from art galleries to restaurants to make a combination of all the possibilities around the interpretations of the spoken word. I did my part together with the audience in a kind of ceremony-hip-hop-experimental-noise, where people helped me get into a trance to finally wake me up with a smile and applause. An intense collective experience.

During my presence at the residence I was also able to develop part of the work that I have been putting into poetry format. That group of poems is currently called TOTEM, and it is an experience of what parenthood is and what it constitutes within me. Once on stage I managed to read some of those TOTEMIC poems, which generated unexpected reactions in my throat and suddenly my joint was interrupted by a sob. I did continue …

All that was Tranås 2019. A great experience that my soul is grateful to have had.